How to Play Wushu?

Wushu is both an internal and external exercise for body and mind, which is very effective in developing a person physically and mentally, and make him ready for any combat. The word “Wu” has five meanings: war, fight, combat, exercise, and dance.

It is the normal strength which is required for day-to-day workout against normal resistance, for example, running, jogging, normal weight lifting. It is not specified for Wushu warriors but before moving to a higher level, one has to have normal fitness.

Performing any kind of workout against the maximum resistance is called Maximum Strength. This level is very important for Wushu warriors as they need to increase their maximum strength limit as much as possible. 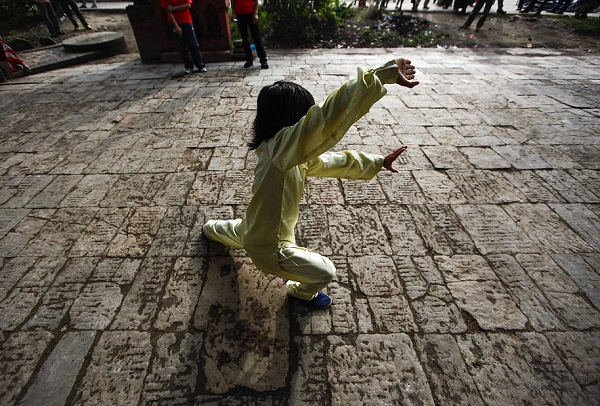 To increase the maximum strength, the Wushu players need to perform a particular exercise in sets. A set must be practiced for 3-7 times and the intensity of performance must vary gradually upwards from low to medium and to high.

Performing any kind of workout against the maximum resistance with high speed is a mark of Explosive Strength. It can be divided into three types −

Wushu is the sport of demonstrating graceful movements that require flexibility, strength, perfect leaps, twists, and flips. Here are some basic moves a beginner can try −

It is a basic stance used for almost all Wushu routines. It provides balance that you require to execute more complicated moves. To begin, stand with your feet apart, slightly wider than your shoulders. Lower your knees into a sitting position, as if you are straddling a horse. Keep your upper body posture straight yet not tensed.

Stand in a forward lunge position, with one foot in front of another in a straight line. Turn your back foot out slightly, with toes pointing outwards. Let both your heels be on the ground. Lower yourself by bending the front leg for about 90 degrees. Extend your back leg. Pull your upper body straight and tall, and look straight ahead.

Cross your right foot over your left foot. Sit comfortably on your left knee, ensuring that there is no space between both legs. Keep good balance to avoid fall over. As you lower your body, lift your left heel off the ground. Turn your head towards the left while keeping your upper body pulled straight and your chin upright. Place your fists on the hips. Ensure your elbows are tucked in, and the wrists face upwards.

Stand upright with your hands by your waist and your wrists facing upwards. Make fists and tuck your elbows close to your body. Placing one foot slightly behind the other, bend a little to gain some preparatory momentum. Using this force, kick the leg that is at the back up sideways. The kick should be as high as you can go.

Stand upright and extend your right arm in front of your chest. Flex your hand at the wrist such that the fingers are facing upwards. Clench your left hand in a fist. With the left elbow tucked inwards and wrist facing upwards, place the left hand at your hips. Put your left foot ahead as a step and raise your right knee up in front of you to reach your hip. In one powerful move, kick the lower right leg out to straighten it. Keep entire right leg parallel to the ground. During the kick, move your arms too.

There are various hand forms used in Wushu −

During the fight, the different positions of hand are called hand forms.

In this posture, all fingers and thumb are joined to make a hand form and the wrist is bent inward. The fingers should not be overly bent. 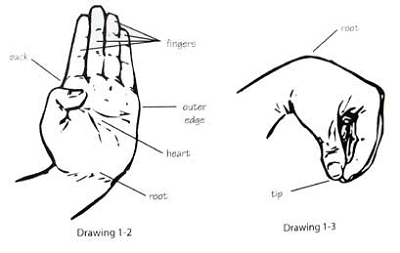 Here five fingers together with the thumb is bent. With the change of use of palm, the thumb is stretched to make a ‘V’ shape. 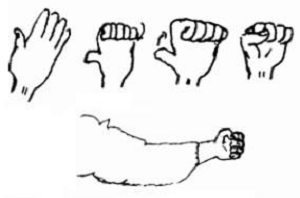 Similar to the normal punch, the fingers are clenched tightly with the thumb across the forefinger and joint of the middle finger.

Here are some body postures before fight −

In this position, you must stand with legs apart up to the shoulder level with straight body.

First of all, you should be aware of the position of our toes, hips, and second shoulder rotation. Hands should be in free moving condition on your shoulders.

Keep your legs in a straight position with the shoulder. 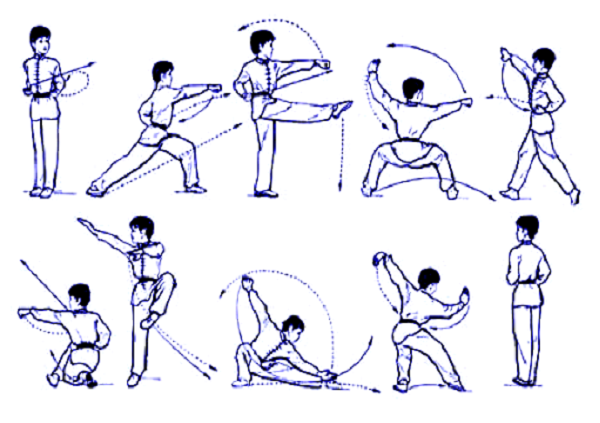 Stretch both your hands towards the head and move them from right to left and from top to bottom serially. We can also move them to and fro. It will not only relax your body but also your mind. Keep both arms relaxed and straight, and move them in a circular motion in front of the body.

Stand in a normal position with the distance between legs keeping normal.

With the help of toes, turn the heel forward and shift our rear foot forward. At the same time, cross your both arms in front of the abdomen. Move the upper hand downward to upward in a circular motion.

At the same time, let the other hand cover in semi-circular motion up to the top of the head in closed foot striking position. At this time along with the bending position of the supporting leg up to waist, let the hip and body take half rotation.

At last, let the striking hand and the leg stamp together on the ground. In all this movement, let both legs be bent from the knee and let the upper torso be straight from the waist.