Modern Pentathlon is a combination of five different sports which include fencing, 200m freestyle swimming, show jumping, pistol shooting, and 3200m cross-country run. All the five sports are contested in a single day. It has been included to the core 25 sports list for 2020 Olympics Games.

Here the players compete with each other in one event after another. The sport usually starts with the fencing event and other sports following it. After the completion of first three sports, the scores of the players are calculated and based on which they are provided the start time for the last two sports. The player who reaches finish-line first is declared as winner. 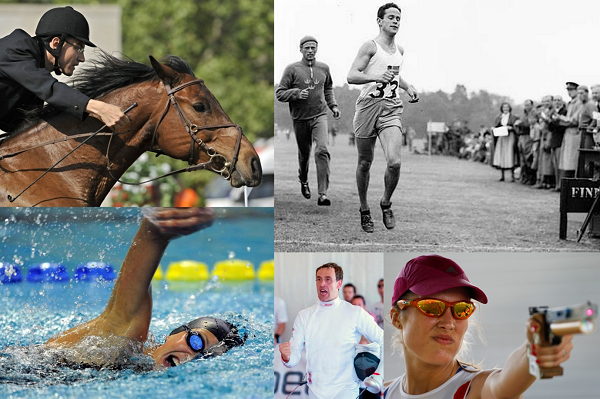 A Brief History of Pentathlon

Modern pentathlon was originated in Greece around the 19th century. Information about the foundation of the sport is found to be disputed as on one side Baron Pierre de Coubertin, who is also the founder of modern Olympic Games, claimed to have invented it, on the other side Viktor Balck, who was President of the Organizing Committee for the 1912 Olympic Games, claimed to have conceptualize the sport.

But from both claims, it was evident that the sport was primarily invented to be a part of the ancient Olympic Games. Initially the modern pentathlon used to run for 5 days and used to consist of 5 events such as: stadion foot race, wrestling, long jump, javelin, and discus. Later Coubertin changed the events in to the modern day events.

Till 1952 Olympic Games, only ordinary cavalry soldiers were considered as professional athletes as they were quite familiar with all the five events of the sport. Women were allowed to play the sport in 1977 on a trial basis in the world championships and officially in 1981.

Even though being added long back in 1912 and still been a part of Olympic Games, modern pentathlon has its own share of ups and downs. Throughout the whole phase, many changes have been made to the sport and at the same time countries started paying interest in this sport. Presently around 28 countries are part of this sport.

Some of the countries which have shown more interest and have achieved numerous medals in the particular sport are Sweden, USA, Czech Republic, Russia, Lithuania, Hungary, Poland, Italy, Germany, Great Britain.