Tennis is believed to have originated during 12th or 13th century in France. However, it was played by Major Walter C. Wingfield, in an hourglass shaped court in 1873 in Great Britain. It seems to have evolved from similar ancient sports like court tennis, squash racquets and badminton.

In 1877, the All England Croquet Club held a Tennis championship in a rectangular court with rules similar to that of modern Tennis. It quickly spread to America, Britain, and later to other parts of the world. 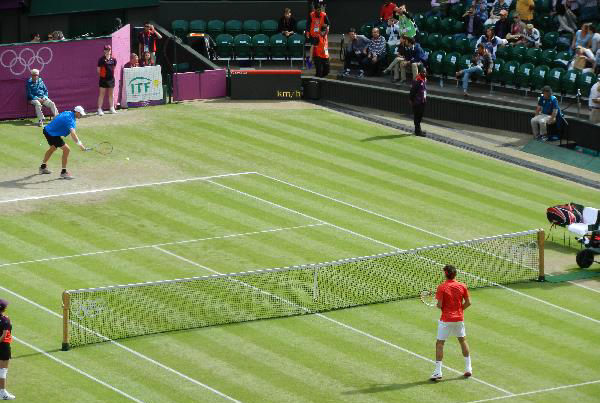 Davis Cup, an international tennis tournament, was held in 1900 to promote the game all over the world.

On March 1st, 1913, International Tennis Federation (ITF), the international governing body of Tennis was established. It formulates rules to be followed by all the players participating in competitions throughout the world. It also sets guidelines, defines the kind of equipment used in the sport, and defines court dimensions.

Tennis is a sport played among two players or two pairs of players competing with each other in a rectangular tennis court with fixed boundaries. The two sides of the court are separated with a net. The sport involves shooting a tennis ball towards the other side of the court with a tennis racket. The ball has to fall within the court boundaries. Players gain a point when the opposite team or player fails to deliver the ball to the opponent.

Tennis tests players in delivering the ball in the intended direction and in defending the ball delivered by their opponent.

Tennis is played in Singles, and Doubles variants. Singles has one player on each side of the court. Doubles match has two players per team.

Davis Cup is the only international tournament where different countries compete with each other and there are almost six players in each side. There would be two players who play singles on round robin basis, and two teams of two players each that participate in doubles category.

The most populated continent in the world is in process of developing the sport. Countries like India, China, Japan, Indonesia, and Thailand have all been playing since many years. These countries have produced some of the best players in the world. Prakash and Vijay Amritraj, Leander Paes, Mahesh Bhupati, and Sania Mirza are top players from India. Kei Nishikori of Japan, Li Na from China, and Thailand’s Paradorn Srichaphan are other popular players from Asian continent.

North Americas and Europe have dominated the sport for years. The origin of the sport lead to France in 16th century where racquets were used to play the sport and it was called Tennis. United States, Serbia, France, Switzerland, Spain, England, Germany, and Russia have all produced some top players over generations. Jon Borg, John McEnroe, Boris Becker, Stefan Edberg, Pete Sampras, Steffi Graf, Andre Agassi, Martina Navratilova, Roger Federer, Rafael Nadal, and Novak Djokovic are some of the greatest Tennis players.