The match is started by the umpires and toss is conducted which decides which team will start the match. At first, the umpire bounces the ball in the ground and on its way down, two players (usually two tallest players) from each team battle for getting hold of the ball, which is known as ball-up. If the ball ever goes out of the field boundary lines, a boundary umpire will stand with his back towards the infield and has to back toss the ball into the field which is known as throw in.

The ball can be moved in any direction in the ground through footballing (kicking) or handballing with clenched fist but can’t be thrown at any condition. Once the player has the ball, he needs to dispose it by either kicking or handballing it. Using any other methods for disposal is illegal and the opponent gets a free kick. If the ball is not in the possession of any player, it can be moved by any part of the body.

A player can also run with the ball, but it must be bounced or touched on the ground in every 15 metres (16 yards). Opposition may try to tackle the player to get the ball. Once tackled, the player has to dispose the ball in order to avoid the risk of being penalised for holding the ball for long period. The player with the ball must be tackled between the shoulders and knees, failing which provides the team with the ball a free kick. If the opposition player contacts the player forcefully in the back, he will be penalised for a push in the back.

If a player takes the possession of the ball which has travelled more than 15 metres (16 yards) in air from another player’s kick by catching it, it is claimed as a mark. When a mark happens, the match stops and the player prepares to kick the ball from the point where he marked. At this point of time, he can’t be tackled. He may also choose to play normally instead of kicking after marking. Once the player starts to play again, normal match starts again and the player who took the mark can be tackled.

The criterion of a successful mark is that the player must have complete control over the ball at any point of time. If two people simultaneously mark the ball, then the mark is awarded to the player in front, i.e. the player standing in front position for marking. If it can’t be determined who is on the front, then ball-up will result. 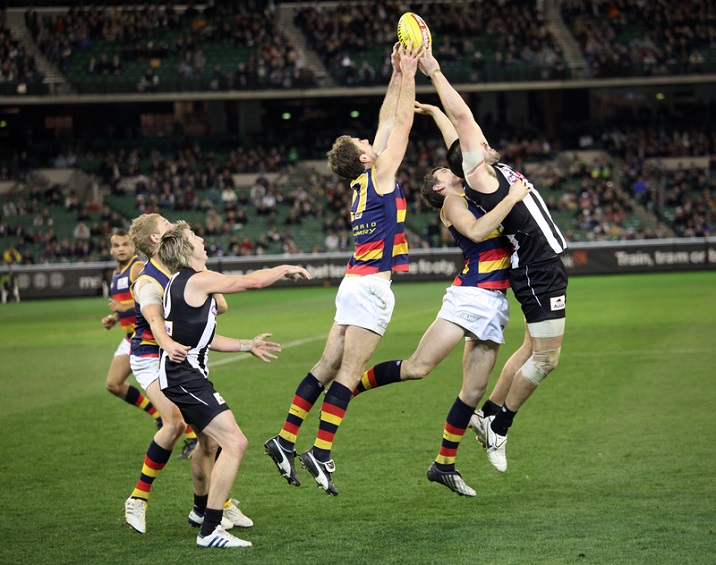 A match has four quarters, whose durations are set by the time keeper officials. At professional level, each quarter is of 20 minutes. With the clock being stopped for instants like goal score, ball out of play etc. Umpire also signals for time-off, when a player is tackled to the ground and resumes once umpire again signals for time on.