Lawn Bowling is a game that demands both your presence of mind and heavy concentration to win a match. Though, from outside, the game seems easy, but it takes several years of practice for the players to become champions.

The balls used in Lawn Bowling are biased which means they are unsymmetrical in nature. It is a very challenging game as one side of the ball is not proportioned and the ball travels in a curved path. The main objective of the game is to place the ball as close as possible to the target which is called as jack.

The history of Lawn Bowling is very old. It is believed that this game was played in Europe during the 12th century. It became very famous in England because in lawn bowling, physical stress is minimum. Since in those days there was always a war with the neighbouring countries, the same proved to be a stress reliever.

As there are different types of lawn bowling, the short mat bowling made lawn bowling very famous. Short mat bowls can be played in hotels, schools and colleges, social clubs and even in village hills because of its versatility. Short mat bowls is famous in such areas because there is a space restriction and this sport is perfect for such a situation. It is also seen that this sport is played at the North Sea oil rigs where the space is very less. 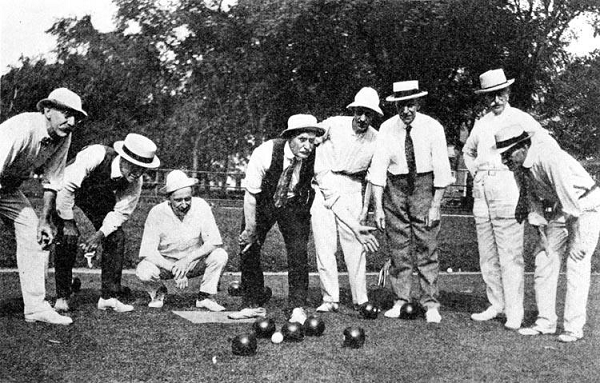 As the game of Lawn Bowling became famous, it eventually came under a ban by the order of King and the Parliament because they feared that the game of bowling may jeopardise the practice of archery and other war-related sports.

At that time, England was always in battle with the other countries so archery was considered as a major sport in that era. But eventually the ban was lifted from this sport and it was played by every part of the society.

We have already mentioned that lawn bowling has stood with time. After its invention, it became so popular in England that the king and the parliament passed a law to ban the game because archery was considered as a prime sport during that era. But currently it is very famous and is being played in more than 40 countries.

Other countries like USA, UK, Australia, New Zealand, South Africa, Belgium, Netherlands and Germany are at the top in this sport. As this game is a prime sport in the Commonwealth Games, maximum teams from the subcontinent also play lawn bowling which includes India, Pakistan, and Sri Lanka.