In case of knocking down pins, a player scores one point for every knocked-down pin. As there are two chances in a single frame, the combined score of both the chances are the final score of that frame. In case, a player fails to knock down all ten pins even after the two chances of a frame, the frame is called an open frame. 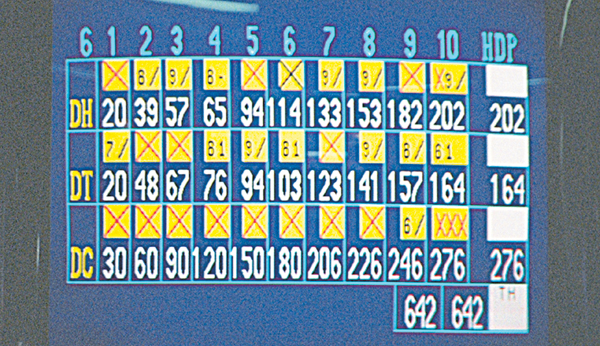 In case of a player scoring a strike, he gets 10 points for the knocked down pins plus whatever is scored in the next two balls as bonus point. In this way, the points scored in the next two frames of the strike are counted twice. The bowler gets a chance to play two extra balls in case of achieving a strike in the first ball of the 10th frame and one extra ball in case of scoring a spare in the second chance.

In case of two consecutive strikes in two consecutive frames, a player scores a double. In case of a double, the scoring of the player can be explained through an example. Suppose Frame 1 = 10 (Strike) and frame 2 = 10 (Strike), then in frame 3, if the player hits thee pins in the first chance and four pins in the second chance, the total will be calculated as follows.

If a player scores three consecutive strikes in three frames, he scores a Turkey or Triple. In case of a turkey, the total scoring is explained below. Suppose Frame 1 = 10 (Strike), frame 2 = 10(Strike) and frame 3 = 10(Strike) then in frame 4 if the player hits thee pins in the first chance and four pins in the second chance. Then the totals will be −

A clean game is a game in which a player shots at least one strike or spare in each frame. The maximum points that can be scored from a strike is 30. In case of the 10th frame, if the player scores a strike, he/she will be awarded two more chances. If he again scores two strikes, for that frame he will be awarded 30 points which is also called striking out.

The maximum score that can be scored in a single game is 300 with 12 consecutive strikes which is also called a perfect game. In the bowling score machine, different symbols are shown for different instances. Here “X” stands for a strike, “/” stands for a spare. A – (dash) symbol signifies no pins were knocked down in that frame whereas F indicates a foul.