How to Play Ten-Pin Bowling?

The game consists of 10 rounds which are called frames. In a single frame, each player is given two chances two knock down all the pins that are arranged at the end of the lane. In a 10 pin bowling game, there are total 10 pins. At the end of the game, the final score is calculated while taking all 10 frames into consideration.

The player starts the game by bowling the ball as the first chance of a single frame. If in a single chance, he successfully knocks down all ten pins, it is called a strike and the frame is completed. After the first ball, if still there are some pins which were not knocked down, a second chance is given to the player. Those pins which are knocked down first are counted and removed.

Once the knocked down pins are removed, the player rolls the ball for the second time and if he successfully knocks down all the pins in the second chance, it is called a spare. If there are multiple players scheduled on the lane, then the game passes to the next player until all players have finished bowling.

The ten pins are automatically arranged by a machine in an equilateral triangle shape at the end of the lane. Each pin is 30cm apart from the other. The distance is measured from center to center. The pins are numbered based on their position and the pin at the first position is called the head pin. The numbering goes on backward in right direction.

Because of large spacing among the balls as well as the small size of the ball, it is impossible to knock down all pins by means of contacting with the ball. So players choose different tactics in their shots which would result in a chain reaction among the pins making all of them fall down.

The process of each pins falling down because of a chain reaction is also called pin scatter.

Brooklyn is a special kind of strike in which a player obtains a strike by hitting the pins in the opposite pocket from which he/she has thrown the ball. In case of right-handed bowler, Brooklyn occurs when the ball crosses over to 1-2 pocket and in case of lefthanded bowler the ball crosses 1-3 pocket This strike is also known as jersey side.

After the knock, if a pin is found to be wobbling or the automatic machine picks up a pin while it is still wobbling, it is considered as standing and no points are given because of that pin. Similarly, if a pin is moved from its position, it doesn’t change its designation. 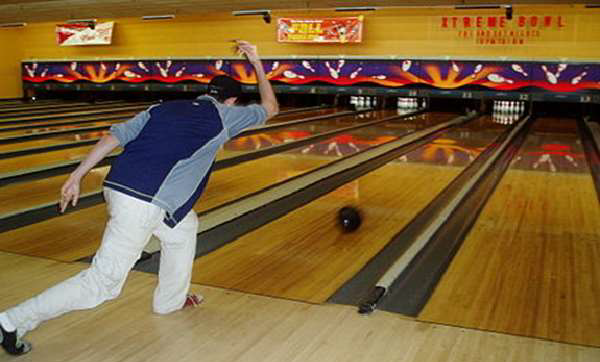 There are mostly two ways to produce a hook. In the first way, players first let go of their thumb and then their middle finger and ring finger simultaneously while releasing the ball on the lane. This gives the ball the required spin that is needed for a perfect hook.

In case of a right-handed player, the perfect time to let go off the thumb is at 10 o’ clock position. That means while moving his hand at similar to 12 to 10 position of a clock, he needs to release the ball for a perfect hook. For a left-handed bowler, the ideal position is 2 o’ clock.

From players to players, techniques and positioning of thumb to get a hook varies. The second way to generate a hook is to hold the ball without any thumb in the thumb hole. In this case, bowlers usually use two of their fingers to generate a hook.

Researches show that ideal shots enter into the pin pockets at an angle of 6 degree. So players usually throw the ball at one side of the lane near the gutter. In some cases, players use one of their hands to use their fingers, whereas the other hand is placed on the top of the ball in order to release it in the form of a shovel-pitch from the side.

In case of extremely young or physically handicapped players, they are allowed to hold the ball in two hands and swing it forward in between their legs. Usually in this kind of release style, players have to release the ball close to the foul line. This is also called granny style.

Presently the shovel style hook release is gaining more popularity among the players because of more revolutions as well as speed it generates to knock down the pins.

Another technique is called bounce pass where players throw the ball from their chest towards the pins. This style is prohibited by many bowling communities at it causes damages to both the lane as well as pins.

Another style of bowling is called backup style where bowlers flick their wrist either clockwise (for right-handed) or anti clockwise (for left-handed) direction. This is very much similar to hook release where the ball moves in a curved path rather than in a straight line.

Typically, a bowling ball rolls vertically. If the thumb and the finger holes are drilled at proper places, the ball hooks perfectly. In Asian countries, where the oil conditions are difficult and the lane maintenance is very poor, it’s really hard to hook the ball on the lane. In those places, spinner UFO releases are more popular.

In case of spinner release, a ball will always slide on the lane instead of rolling vertically regardless of the oil conditions of the lane. The ball mostly takes an unconventional path through the pins creating a domino effect to knock down the pins which is quite rare in conventional releases.

Spinner release is performed by rotating the ball counter clock wise until the hand is on the top of the ball; two fingers are at 12 o’ clock position and the thumb at 6 o’ clock position. While releasing the ball, all fingers come out of the ball simultaneously. Spinning is harder to master and if not performed correctly might cause injury. Players from Taiwan and Hong Kong mostly follow this type of release.