Javelin Throw – How to Play?

If you are practising for the first time, then you should probably start from this type of throwing method. This is one of the basic forms of throwing javelin. Let’s analyse it in a step by step procedure.

In addition to the quick action of the throwing hand, a good forward drive is needed for the right hand side of the body. Before the throw, when you are pulling back the javelin, make sure that your palm is under it all the times. Make a low bend in the elbow and pull the javelin back along with your shoulder keeping the tip of it along your eye level but it should be kept as high as possible. 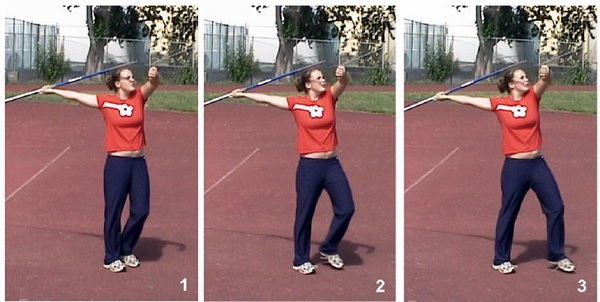 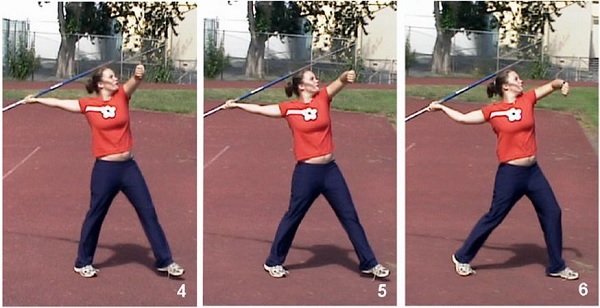 It is also important to position your body behind your left foot during the course of action. By grounding your left leg properly into the ground, you should form a strong base for throwing. Don’t push your right leg forward instead bend your knee in the direction of throw. 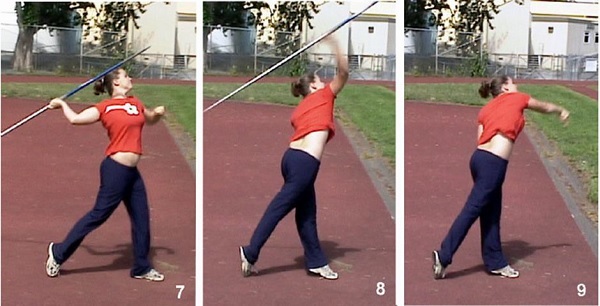 As a mode of initial practise, try to throw the javelin up to a minimum distance of 8-10 metres. Once you get the grip over this technique with rigorous practise, aim for longer distance by throwing your javelin with some tilting angle with respect to horizontal. However; most of the throwers fail at this point in maintaining the tip of their javelin in the direction of throw.

After getting a good practise over one step throw, we can move to practise the running throw. This also requires much hard work. Basically the two types of running approach we will discuss over here and they are −

Let’s discuss about these in brief.

Here you have to first stand about 7 to 8 meters behind from the take-off point. Hold the javelin firmly with your hand and pull it backwards with your shoulders as far as possible but here also you should point the javelin tip towards the direction of throw and should keep it parallel to the ground. Keep your feet initially close to each other and with small steps start moving forward. 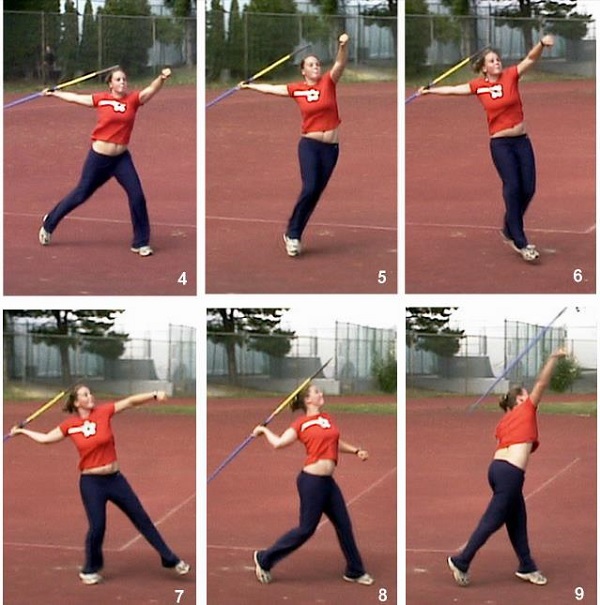 Take a small step with the right foot and then with the left. Keep repeating the steps and with a very fast stride finish it with the left foot. Maintain the level of the javelin throughout the session on your eye level. With the last finishing stride your left foot should grasp the ground firmly and you should fling the javelin in the air with vigorous force with an angle of 40 degree.

Some other important aspects of this throw are −

In the run up, the impulse stride is the longest stride and during this period the athlete needs to land on bent leg. This is because, it will allow the athlete to move his body with a fast stride to have an effective delivery. If you make sure you’re landing with the ball of your right foot, then bending of the leg is achieved automatically. Now let’s discuss about 10 stride approach.

The athletes those who are learning the playing techniques, for them, four stride approach is good to start with but as you get the grip over it, practise should be done with 10 stride approach. This is the approach that most of the senior athletes do in their routine practise schedule. The length of this run up generally varies in between 17 metres to 21 metres. Let’s discuss the process in a step by step manner.

Here couple of things should be noted. First of all an impulsive fast stride can be made at last, by increasing your run up distance to a certain extent. The second last stride is often termed as second crossover because in this step the thrower feels like he is in a floating condition. This has two major advantages. 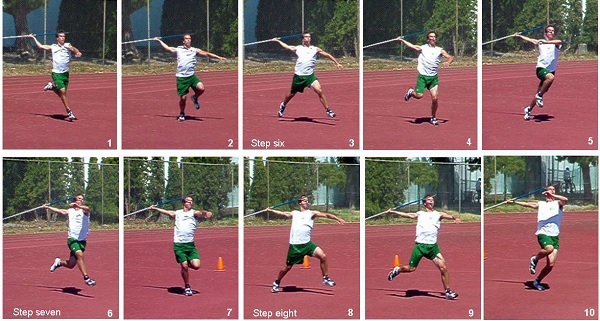 Although the bent over of the left leg is natural after the landing of foot, still it should be held as much straight as possible to give an effective block. To make the throw proper, let your left arm move with the running rhythm in a natural flow. It should be kept high and in front.

Another important thing that the athlete should maintain during T position is that, he should keep the level of both the shoulders same. As the left elbow reaches the body, the blocking action is aided by the left arm itself. After throwing action is being completed, recover yourself by landing on your right foot before the arc. 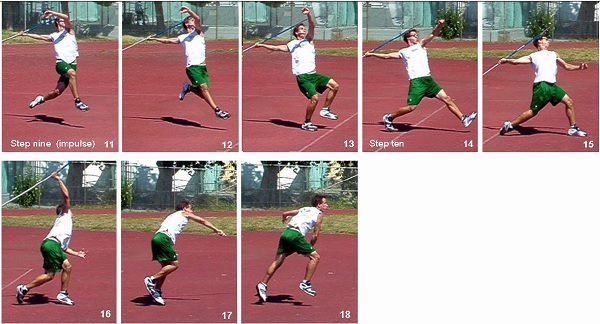 Fast running aids the throwing speed of the javelin but that does not mean that we will increase the speed to much extent because excess speed has its own disadvantage. Among all the disadvantages, the two most important ones are −

A slight precaution while throwing can prevent the above.