How To Play Softball?

There are so many techniques involved in softball to win a match. Batting and bowling in every form of this game has got tricks to win the match. The match starts when all hear play ball from the umpire. When all the fielders are in fair territory and the batsman is ready, the pitcher stands at the pitching plate to throw the ball.

The main aim of the pitcher should be to throw the ball in such a way that it must pass the batsman to the gloves of catcher who is standing behind the home plate. The throw and pitch is done with an underarm motion.

In fast-pitch game, the pitcher throws the ball in a wind mill motion style. Windmill motion is that motion where the pitcher extends the throwing hand around the body and releases the ball at the hip level at maximum speed.

If the batsman does not swing or if a pitch is not a strike then it is known as a No Pitch. A count in softball is the number of balls and strikes and here the number of balls is always stated first. A count of 3 and 2 is a full count. In top level matches, pitchers try to throw the ball at great speed at the inner and outer corners of the plate. While throwing the ball, the pitcher can vary the height of throwing the ball, so that it may further make it harder for the batsman to strike the ball. A pitcher must try to throw the ball with utmost power. In 1996 Olympics, a pitch has reached up to 118 kilometres per hour in women’s matches. In men’s matches highest recorded speed is 140 kmph.

The offensive team or the batting team sends one batsman at a time into the field for batting or hitting the ball and the order in which a player goes to bat is called the batting order. Once the batsman hits the ball into a fair territory, he/she must run with full speed. While running to first base, the batter is called a batter-runner. She becomes a base runner or runner when she safely reaches first base.

If a fielder, while holding the ball, touches a base which is the only base towards which the batter may run and she does it before the batter arrives there is called force out.

If a fielder touches a base while holding the ball before the batsman reaches it, it is called force out. 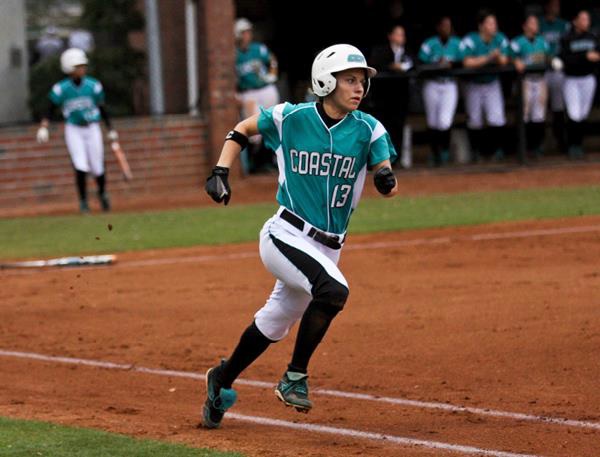 The time a batsman goes to a base that is already tagged is called as tagged out. When the ball hit by the batter is caught by a fielder it is called fly out. Like catch out in cricket, fly out is the common in softball.

Among all the players, the infielders have the smallest glove. Its size ranges from 10 to 12 inches. The reason behind making the glove smaller for the infielder’s is that they have to pick the ball in the field quickly and have to throw the ball in the desired direction. So if their gloves will be bigger in size then they may find it difficult to collect the ball quickly and send it to the required position.