The playing environment for snooker should be a closed room with a snooker table
placed in the center. Sufficient illumination is casted on the table from the above and all other lights remain switched off till the match ends to facilitate the players in playing the sport.

The match requires instant strategy formation and correct approach during the shot, so that you can score more points with minimum number of attempts. That is the reason it is ensured that the room should be free from any outside or random noise. Players are given a healthy atmosphere so that they can perform their best.

As snooker is a cue sport, it is necessary that all the equipment used for this purpose should be compliant with IOC (International Olympic Committee) standards and should be robust and comfortable to enhance the performance of the players. In this chapter we will be dealing with the equipment used in this sport.

The playing surface should be 11 feet 8.5 inches by 5 feet 10 inches. The table consists of six pockets one pocket each at the corner and two at the center of the longer side. 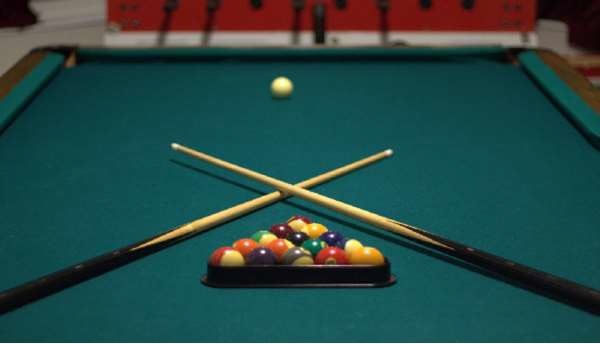 There are 22 balls on the table which include 15 red, 6 colour balls and a white cue ball. The size of each ball is 52.5mm. Each color has different points which are as follows −

Cue is a stick made up of wood or fibreglass and tapered to a tip ending in leather. The cue is used to hit the cue ball in order to pocket the other balls.

The triangle is used for collecting the red balls into the formation essential for the break to start a frame.

Half butt is a combination of cue and table length rest which is used when the cue ball is at a position where entire length of the table has to be used to strike it.

Rest is a stick with an X-shaped head that is used to hold the cue when the cue ball is out of reach.

Ball marker is a D-shaped notch which is used by a referee who can mark the position of the ball by placing the marker.