Ice Hockey is one of the main winter sports played in the West, primarily in Canada and Northern America. Ice hockey with its growing popularity in the west and with quite a good acceptance rate has been used in the entertainment industry as an inspirational heroic sport. Several Hollywood movies, musical albums, television shows are based on this game.

This game, has become quite famous across the globe and conducted through different championship leagues, of which the popular leagues being the National Hockey League (NHL), the Stanley cup trophy, Kontinental Hockey League (KHL) in Eurasia and Asia League Ice Hockey (ALIH). The International Ice Hockey Federation (IIHF) is a 100 year old governing body for this sport with 74 member countries and organizes more than 25 world tournaments in various categories.

Approximately 80 countries are currently playing this sport and 74 countries participate in the championship leagues and are being indicated in the picture below. 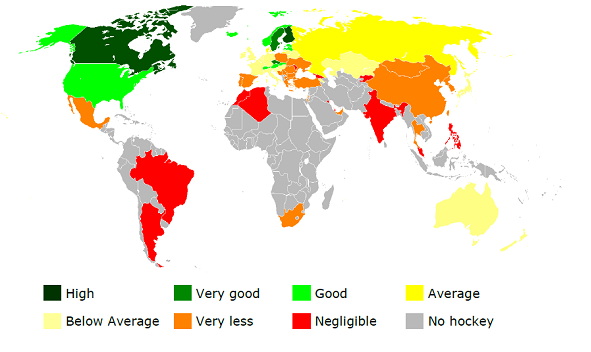 According to IIHF survey of players, the participating countries are highlighted based on the number of players in that region.